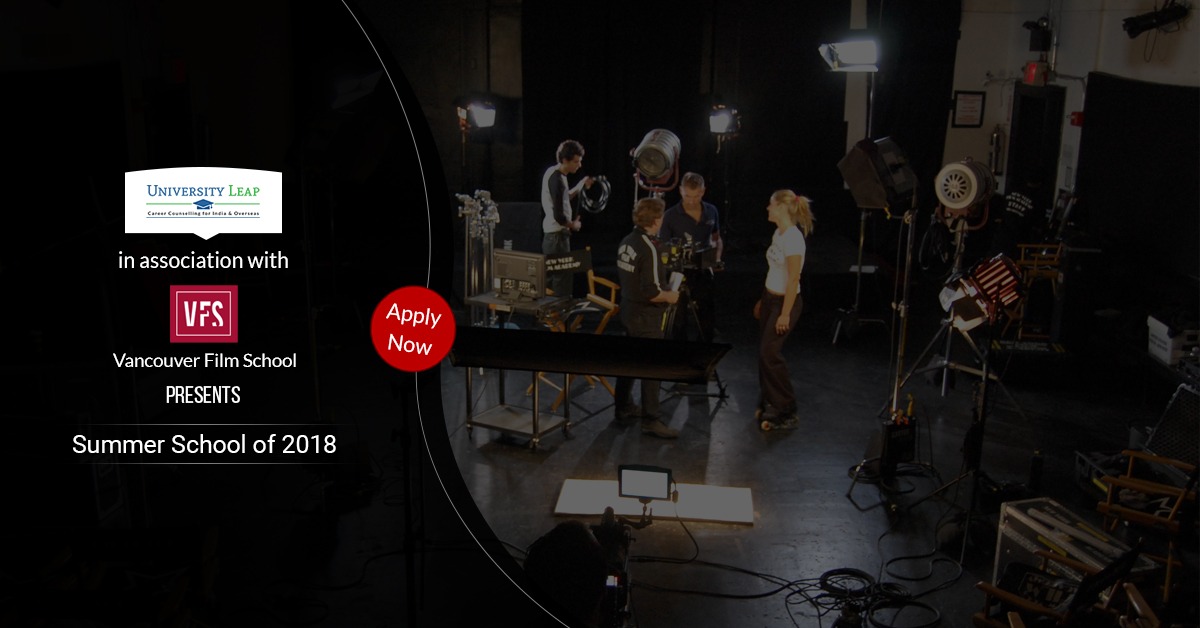 University Leap is a team of study abroad education consultants in Delhi. Observing the interest and passion of so many students in films, designing and television, our team is partnering up with the Vancouver Film School, Canada on the upcoming Summer School 2018 programme.

Here we share some insight into the film school and other important details.

Vancouver Film School has is a private entertainment arts school located in Vancouver, British Columbia, Canada. It was founded in 1987, and has received international recognition since then. It has a huge campus, which comprises of six buildings. VFS offers 13 world-class, globally recognized post-secondary programs that cover every aspect of the entertainment industry.  Each and every program has been developed and taught by award-winning industry professionals, which means that each program has an intensive curriculum that evolves strictly along the demands of the entertainment industry.

“It was founded on the philosophy that one year of concentrated work, are more valuable than four years of purely theoretical knowledge, the innovative one year balances industry-led theory and hands-on production,  that gives students the necessary skills to craft a professional-level portfolio or reel.”

“VFS has an immensely respectable institution, with a great history of notable alumni and works like,  its alumni have worked in movies like Avengers, Alice in Wonderland, Frozen, Jurassic Park, Avatar and TV series like How I Met your Mother, Game of Thrones, Big Bang Theory and many more.”

Vancouver Film School, Canada is a recognized world leader in entertainment arts education, offering 12 full-time programs to over 1000 students across eight campuses. In addition to being named “School of the Year, in CG Student Awards three years in a row, VFS has many celebrated achievements, through its students, faculty and alumni, VFS has been honored at the Emmys, Oscars and Independent Spirit Awards and have worked behind the scenes on the 17 highest grossing films of all times

They have successful tie-ups with various companies from the industry, with whom they arrange seminars, placements, and an industrial meet up so that the students are well equipped about the opportunities that they have in this field, this is extremely helpful as the student becomes aware in detail about the upcoming opportunities, and sometimes the students who have an extremely good score and profile are offered jobs and internships there and then.

Some of the Industrial partners are, HP, Final Draft, Adobe, Pixologic, AutoDesk, Disney and more. In other words, it not only provides you with the best education but also provides you with all the opportunities in the specific field served in as a platter. VFS works with industry, community, business and education partners on many levels throughout the world, not leaving any opportunity unattended for the student and with a goal to equip students with the best education, and to position graduates for success.

VFS is located in the heart of downtown-Vancouver, which named as the best cities in the world almost every year. Vancouver’s natural beauty and cosmopolitan environment combines to make an ideal place to pursue education. A city that is renowned for its natural beauty, from snow-covered mountains, to the Pacific Ocean and towering coastal rainforests. The city has mild climate, safe atmosphere, and bustling downtown makes it a destination for students seeking to live, create and be inspired. VFS has eight campuses stretching across the heart of the city.

Each campus is designed to closely emulate a professional studio environment, offering students equipment and resources needed for them to do their best works. The most beneficial aspects for students in VFS is that all the additional costs, which include the various things that they require to create a model, or make a thing are provided by VFS itself, the student doesn’t need to spend additional money to buy things for various projects as they are provided by the college itself.

The campuses include film sets, production studios, green screens, editing suites, sound studios and much more. They have a student service team, that supports the students through there year in VFS. They help the student in housing, budgeting, medical insurance and advise them on their rights and responsibilities as a living member in the Canada and VFS. VFS is known for its friendly and welcoming student environment, it takes care that the students stay at ease and comfort.

The various Intakes varies from courses to course, for which it is important to check the college website. The Scholarships may also vary thus it is a wise idea to contact University Leap, the study abroad education consultants in Delhi. You can drop an e-mail at, info@universityleap.com or call us at, +91 9899101239, 01149322334